WHAT IS MULTI-GRADE OIL? 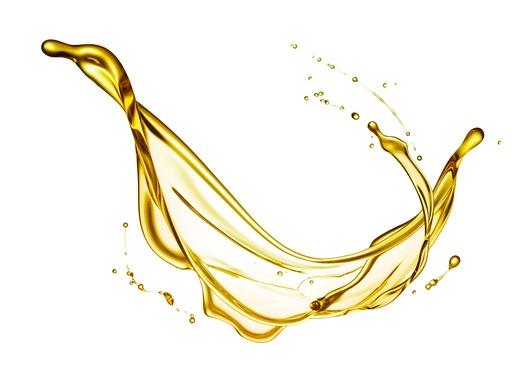 THE MIRACLE OF THE MULTI-GRADE

The Society of Automotive Engineers (SAE) was formed in 1905.  In 1911 it established its viscosity grade classifications for engine oils.  This first SAE Viscosity Grades for Engine Oils classification was for ‘straight’ monograde engine oils.  It was common in areas with large summer to winter temperature variations for an engine to be run on a less viscous oil grade, such as SAE 10, in winter and on a thicker SAE 30 in the summer.

The “non-W”, high temperature viscosity grades have their viscosity measured at high temperatures representative of the conditions that the oil encounters in an operating engine.  Each “non-W” viscosity grade has a range of viscosities at 100o C which it must fall within.  For instance, an SAE 30 must be between 9.3 and <12.5 cSt at 100o C, that’s the approximate temperature of the bulk oil in the engine oil circulating system.  Then each “non-W” viscosity grade must also have a minimum High Temperature/High Shear (HTHS) viscosity, this is the viscosity of the oil measured at 150o C under high shear conditions where the oil is being squeezed between moving surfaces.  That duplicates the conditions the oil finds in areas such as between the piston ring and cylinder, and between cam followers sliding on cam lobes. 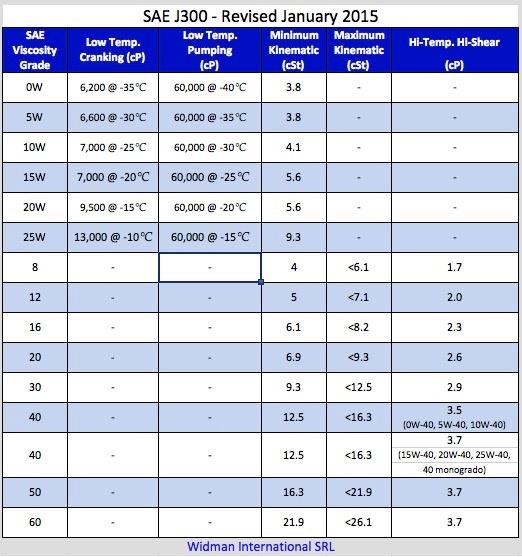 The very early SAE Viscosity Grades for Engine Oils defined only one condition of the oil, its viscosity at engine operating temperature, and ‘straight’ SAE monogrades ran from SAE 10 to SAE 50.  But these early monograde engine oils had problems.  In winter in the U.S.A. it was found that engines could just not be cranked over at the low temperatures that were experienced.

That’s why the SAE developed “W”/winter, grades of engine oil.  This led to the introduction of SAE 10W, 15W, 20W and 25W low temperature viscosity grades.  An engine would be run on SAE 30 engine oil in summer, and on an appropriate ‘W’ viscosity grade in the winter which would allow the engine to be cranked and started.  Later, the SAE added the Low Temperature Pumping viscosity requirement to “W”/winter grade viscosity classifications because it was found that after long periods of cold soak at low temperatures the oil might not even be able to be pumped once the engine was started. 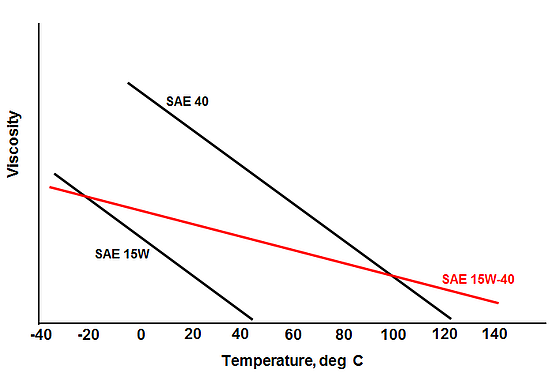 But, how do we produce a multi-grade engine oil using a Viscosity Index Improver (VII) additive, say a mineral oil based SAE 15W-40?  Synthetic oils have naturally high Viscosity Indices (VIs), they are naturally multi-grade oils without having to have a Viscosity Index Improver (VII) added to them.  We start with a lower viscosity mineral oil which meets the cold temperature cranking and low temperature pumping specifications of SAE 15W oil.  Then the right volume of VII is added to produce the high temperature viscosity of an SAE 40 engine oil, and we end up with an SAE 15W-40 multi-grade.  It all sounds simple, but it’s how the VII works that is the intriguing thing.

A Viscosity Index Improver (VII) additive is an organic chain molecule which is bundled up like a ball of spaghetti and dissolves in the oil.  When cold the VII molecule shrinks and the oil has less resistance flowing passed – less resistance to flow, lower viscosity oil.  When hot, the VII molecule swells and produces higher resistance to the oil flowing passed, the oil has still thinned out due to the temperature rise but now it has a higher viscosity than if the VII was not there. 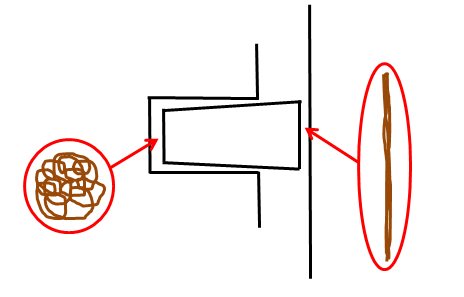 In the piston groove, the oil is not subjected to any sliding motion, the Viscosity Index Improver molecule isn’t distorted at all, it remains in its ball of spaghetti shape, the oil has a high viscosity and cannot move through the ring groove gap.

Not only does a multi-grade engine oil allow low temperature starting and protect engine components in high temperature conditions, it also minimises oil consumption and contributes to improved fuel economy.  All from a little molecule shaped like a ball of spaghetti which shrinks when it’s cold and swells when it’s hot.  That’s the miracle of the multi-grade.